ALL INCLUSIVE TO THE BEST NIGHT LIFE AS A VIP

ALL INCLUSIVE TO THE BEST NIGHT LIFE AS A VIP

Why Nite Tours Is The World’s Leading Nightlife Company

Awarded Top night-life company by Vegas.com and Inside Vegas, recognized by the chamber of commerce, tourism bureau, as well as many mentions in GQ, Vogue, LA Times, Vegas Sun, American Airlines, Virgin, Sun Holidays, Conde Nast Traveller, Luxury Magazine and many other international magazines and news features.  Not to brag (but we want to…) we have hosted many celebrities on Nite Tours from Taylor Swift, Rihanna, Nathan Fillion (who was a Nite Tours Host for many years) the list goes on…Party where the Stars go, Nite Tours VIP Club Crawls and Party Crawls.

Over 32 years and Nite Tours continues to be the innovative leader in club crawls, party buses and night life tourism.

Nite Tours is voted as “The” Las Vegas Club Crawl Company and offers an “almost” All Inclusive party.  Enjoy drink specials/happy hour, VIP Access with no line, all cover paid and of course our new Luxury Party Buses with open bar, dancing, music & light show , charging stations, along with the most talented (and Nevada Gaming certified) Nite Tours Hosts in the night life industry!  Visit as a VIP with Nite Tours to the Hottest Las Vegas premier night clubs and Party Venues; Hakkasan, OMNIA, ZOUK, LIGHT, Jewel, TAO, Marquee, SBar, On The Record, Level Up, SkyFall, RockBar, and many others

Nite Tours has sold over 3.6 Million hangovers and counting.  Each tour is specifically designed to meet the needs of Bachelor, Bachelorette parties, Birthdays, Conventions, Corporate celebrations, singles events, couples and so much more.  Click to learn more about Nite Tours club crawls.  We work hard to offer Quality, Service & Value at a reduced price to our clients. The 9 Major Tourism Awards speak for themselves!

The Best of Las Vegas Strip as a VIP with Nite Tours!

Best & cheapest way to Party on the Strip in Las Vegas. Perfect Post Raiders or Knights Game or friends hanging out.

The best Las Vegas nightlife to fit into any schedule.

Nite Tours offers Quality, Service & Value throughout your entire tour from booking process to coming back to see us again. Once you take a Nite Tours you will see, feel and experience the difference. Nite Tours is pure luxury and is pretty much all inclusive for your entire evening for as low as $19.  Click below to visit our Special Prices for Bachelorette, Divorce Parties, Couples and Friends visiting Las Vegas, and so on…Only the BEST for our Nite Tours clients!!!

By the way, download our Nite Tours app at the Google Store – it will amaze you!!! 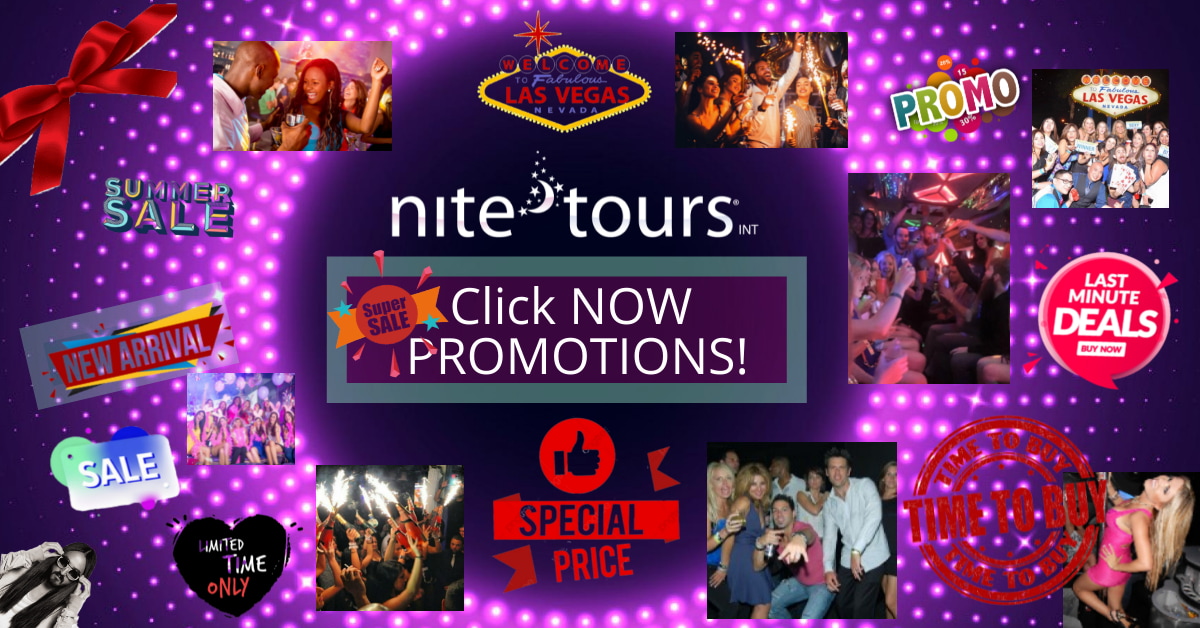 Global Leaders in Nightlife Tourism Since 1990.

Nite Tours is the world leader who continues to create and provide innovative, high-quality, entertaining, service-driven nightlife tourism and transportation products to all markets and all price ranges.

Nite Tours provides the highest quality, service and value in night life tourism and transportation products. We continue to change tourism with our innovative technology, making Nite Tours the leader on a global scale in night life